NASA's future Space Launch System (SLS) won't be fully operational until it can utilize the new expendable RS-25E engines which probably won't be ready until the year 2021. However, NASA has 16 Space Shuttle Main Engines (SSME: RS-25D), previously used by the Space Shuttle stored away for use by the SLS. Since the SLS will utilize four engines per flight, the SSME could launch up to four SLS missions before the arrival of the expendable RS-25E engines. But the safety of astronauts launched on the SLS may depend on utilizing these engines on unmanned test missions.
2014 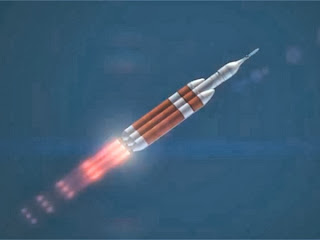 In 2014, NASA will use the ULA's Delta-IV heavy to test launch the Command Module (CM) of the future Multipurpose Crew Vehicle (MPCV),  placing it in low Earth orbit for reentry back on Earth. The  Service Module (SM) of the MPCV, however, will still be under development by the European Space Agency and won't be available to launch with the CM until   2017

The SLS heavy lift vehicle will make its maiden launch in 2017 along with the complete version of the MPCV . This unmanned flight could be as simple as sending the MPCV to TLI (TransLunar Injection) or on more complex journeys to the Earth-Moon Lagrange points or to some other points of interest within cis-lunar space.

Of course, serious problems with the Apollo Command Module occurred  during a launch rehearsal test on  January 27th, 1967 which cost the lives of three American astronauts:  Virgil I. "Gus" Grissom (a former Mercury astronaut),  Edward H. White (the first American to walk in space), and  Roger B. Chaffee-- an astronaut who never got a chance to fly into space.

So as far as safety is concerned, I believe it would be prudent for NASA to launch the SLS more than just one time-- unmanned-- before actually placing living human beings on top of the new heavy lift vehicle.

But that doesn't mean that such early SLS flights can't also be put to good use. Below is a proposal for two additional SLS flights before the first manned flight of the SLS/MPCV in 2021:

This would give Bigelow Aerospace the advantage of having a huge space station in orbit for exclusive  fee based Commercial Crew and foreign spacecraft  visitations at least 10 months out of the year.   Bigelow could still pay  private launch companys to deploy its smaller microgravity facilities (BA-300) nearby. This would allow small specialized microgravity labs to function without human interference while the human engineers and scientist took shelter at the larger Olympus space station until the experiments are completed and the results can be retrieved from the smaller facilities. Human access to the Olympus space station will, of course, depend on the availability of operational Commercial Crew spacecraft which should be available to NASA well before 2019.

2020
I also propose that in 2020, an orbital habitat derived from the SLS hydrogen  fuel tank, similar to the Skylab 2 proposal,  also  be deployed by the SLS to  LEO. Such a habitat could be equipped with a six meter in diameter internal hyper gravity centrifuge-- easily accommodated within the 8.4 meter interior diameter of the space station. This will enable NASA to see if one to two hours of hypergravity per day  can  significantly mitigate some of the deleterious effects of microgravity on the human body. The new NASA space station will also be supplied with enough water shielding to protect astronauts from major solar events while also  reducing their long term exposure to cosmic radiation. Again, NASA will need to utilize Commercial Crew services in order to access the SLS deployed NASA space station at LEO. In the 2020's, a similar SLS derived habitat will be placed at one of the Earth-Moon Lagrange points and could someday be used to house astronauts on interplanetary journeys.

So before the Space Launch System is fully operational in the early 2020s, the old Space Shuttle Main Engines could allow the SLS to deploy two enormous space stations: one privately owned  and one owned by NASA. Both stations could serve as places of refuge if one of the stations had to be abandoned in an emergency. And they could both serve  as  way stations for future reusable Orbital Transfer Vehicles headed towards the Earth-Moon Lagrange points or to Lunar orbit. A new generation of space stations would allow NASA to finally move beyond the ISS while focusing its efforts and finances on beyond LEO missions to the Moon and beyond.

Adding two additional unmanned SLS launches should help to enhance the launch vehicles safety and reliability before manned missions begin in 2021.  And, under this scenario, four SSME would still be available in case the  RS-25E engines are still not ready for manned SLS missions by 2021.