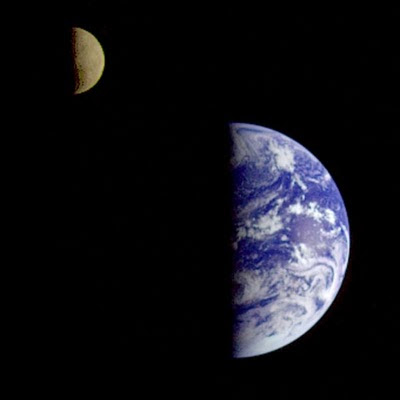 Congress has now made it clear that they want the immediate development of a heavy lift vehicle and a crew exploratory vehicle capable of beyond LEO missions and as a back up transport to the ISS. They have also made it clear that they want NASA to utilize technologies derived from both the Space Shuttle and Ares I/V programs since billions of tax payer money has already been invested in these technologies.

Recently, NASA has been promoting a philosophy of developing new transport systems that can be utilized not only by NASA but also potentially by the military space program and by private commercial space programs. The advantage of such a philosophy is that increased demand for common transport systems or components could reduce cost for everyone that utilizes such vehicles or components.

But is there a way that NASA could cheaply incorporate all of these ideas? I believe the answer is yes! 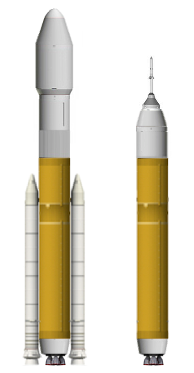 Boeing also proposed using a stretched hypergolic fueled SM (Service Module), requiring an extra 8 to 9 metric tons of fuel in order for the crew launch vehicle to transport a 20 metric ton capsule and crew to LEO. The United Launch Alliance (ULA), however, has proposed using an ACES 41 as a LOX/LH2 fueled Service Module. Utilizing an ACES 41 SM with a shuttle derived crew launch booster which I'll call the SD-CV (shuttle derived core vehicle) could potentially lift more than 30 metric tons to LEO. Since the ULA plans to use the ACES 41 as a common upper stage for both the Atlas and the Delta IV, the high production demand for the ACES 41 by NASA and the ULA should help to reduce cost for the ACES 41. 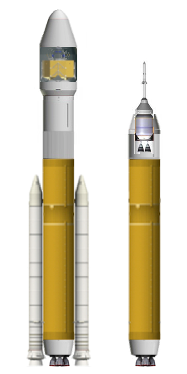 The SD-HLV with an Altair lunar landing vehicle and the SD-CV with a Command Module (CM) and an ACES 41 Service Module (SM).
An SD-CV crew vehicle with the ability to launch over 30 metric tons into orbit would also give it approximately the same capabilities as the current space shuttle with the exception of not being able to return large payloads back to Earth. But the SD-CV should be substantially cheaper to operate than the shuttle since it does not require SRBs. The SD-CV could also be one of the safest manned launch vehicles ever developed since it would only have two stages, with each stage having multiple engines capable of supplementing a failed engine in both stages. Being hydrogen fueled would also make it potentially the greenest manned space vehicle ever developed. While a manned launched SD-HLV would still be safer than a space shuttle launch, the SD-CV should be equally as safe as a man rated Atlas V-401 and a substantially safer vehicle than an SD-HLV, Delta IV heavy, or a Falcon 9 (the two stage Falcon 9 only has one engine for the upper stage so a single engine failure in the upper stage would terminate the mission).

Any space capsule chosen by NASA for the Orion CEV (Crew Exploratory Vehicle) should be able to be used by NASA and private industry on top of an ACES 41 which could be used by an Atlas V or a Delta IV heavy. Again, the higher the demand for a particular crew capsule, the lower the capsule's production cost will be. 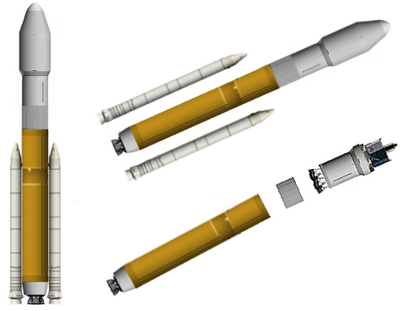 An SD-HLV lunar mission would launch an Altair into Earth orbit for a rendezvous with a CM-SM-ACES 41, or it could use the Altair to transport unmanned payloads (lunar base modules, vehicles, oxygen factories, etc.) weighing more than 10 metric tons to the lunar surface.

Because of its large payload capacity, some might question the private commercial viability of the SD-CV as a crew launcher against much smaller potentially manned rated launch vehicles like the Atlas 5 and the Falcon 9. However, if a payload carrier is placed between the command module and the service module, the shuttle derived crew carrier could also transport and additional 20 metric tons of cargo to LEO. While the space shuttle is banned from carrying commercial loads into orbit, a private commercial company would have no such restrictions! 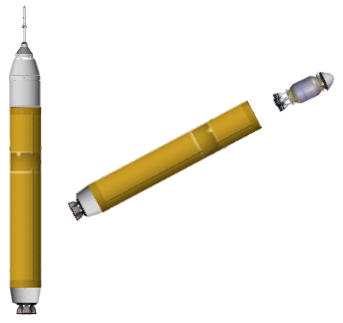 SD-CV could be launched into to orbit for a rendezvous with the Altair for a lunar mission or it could be used to transports crew and cargo to the ISS or to private commercial space stations.
There are two principal options for the EDS (Earth Departure Stage) for the unmanned heavy lift vehicle: one that uses a single JX-2 engine and one that uses multiple RL 10 engines. Since the ACES 41 in this concept and the Altair lunar lander would also use RL-10 engines, using RL-10s in the EDS, Service Module, and Altair lunar lander would obviously increase the demand for the RL-10 which should reduce the production cost for the engine.

After the Orion-CM-SM-ACES 41 docks with the Altair and EDS (Earth Departure Stage), the EDS provides most of the delta-v for transferring the Altair and the Orion to the L1 Lagrange point.

The single stage Altar vehicle would transport up to three metric tonnes of payload (crew transport module, cargo, and crew) from L1 to the lunar surface and back to L1. L1 departure for the Altair vehicle enhances the ability of the lunar lander to conveniently land at practically any point on the lunar surface.

The Altair lunar landing vehicle was originally proposed to have a LOX/LH2 descent stage and a hypergolic fueled ascent stage. However, there is no reason why a lunar landing vehicle can't be a single stage vehicle by simply using the descent stage to land and lift a small crew module weighing about 3 metric tons with four passengers and payload. This would mean that NASA would only have to develop one lunar vehicle instead of two, substantially reducing development cost. Plus the Altair descent stage would use an RL-10 engine which would further reduce the cost of the RL-10 engine used by both NASA and the ULA. 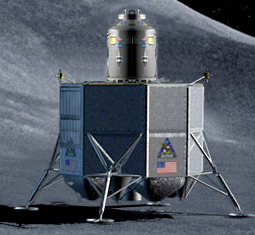 A single stage Altair vehicle with a crew transport module would be much cheaper to develop than the two stage Altair concept that uses both a LOX/LH2 descent stage and a hypergolic fueled ascent stage. For long term missions to a lunar base facility, a simple light weight aluminum sun shade could be used to cover and shield the vehicle from direct sunlight on the lunar surface in order to reduce hydrogen and oxygen fuel boil-off. 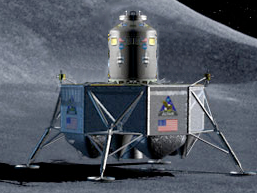 So some day a paying tourist or a lunar lotto winner aboard a Falcon 9, Atlas V, Delta IV heavy, or a SD-CV could simply fly into orbit and dock with another ACES 41 (originally fueled with lunar oxygen and hydrogen at an L1 space depot) to travel to L1. At the Lagrange point, passengers would dock with an L1 fueled reusable Altair vehicle which would transport them to the Moon where they could perhaps stay at an appropriately mass shielded a Bigelow lunar hotel. The same lunar vehicle could be refueled with lunar oxygen and hydrogen for the tourist's return to L1 where they would dock with a CM-SM-ACES 41 equipped with an aerobreaking hypercone that would take them back to Earth orbit. There they would dock with a space capsule or Dreamchaser space plane that would finally return them to the Earth. That might be a very interesting vacation perhaps 15 or 20 years from now!

6. A Commercially Based Lunar Architecture

10. No time for NASA complacency on crew safety

11. All of a Sudden, Everyone Wants to Be a Rocket Scientist

The Rapid Decline of the American Middle Class


Here are the statistics to prove it:

• 83 percent of all U.S. stocks are in the hands of 1 percent of the people.
• 61 percent of Americans "always or usually" live paycheck to paycheck, which was up from 49 percent in 2008 and 43 percent in 2007.
• 66 percent of the income growth between 2001 and 2007 went to the top 1% of all Americans.
• 36 percent of Americans say that they don't contribute anything to retirement savings.
• A staggering 43 percent of Americans have less than $10,000 saved up for retirement.
• 24 percent of American workers say that they have postponed their planned retirement age in the past year.
• Over 1.4 million Americans filed for personal bankruptcy in 2009, which represented a 32 percent increase over 2008.
• Only the top 5 percent of U.S. households have earned enough additional income to match the rise in housing costs since 1975.
• For the first time in U.S. history, banks own a greater share of residential housing net worth in the United States than all individual Americans put together.
• In 1950, the ratio of the average executive's paycheck to the average worker's paycheck was about 30 to 1. Since the year 2000, that ratio has exploded to between 300 to 500 to one.
• As of 2007, the bottom 80 percent of American households held about 7% of the liquid financial assets.
• The bottom 50 percent of income earners in the United States now collectively own less than 1 percent of the nation’s wealth.
• Average Wall Street bonuses for 2009 were up 17 percent when compared with 2008.
• In the United States, the average federal worker now earns 60% MORE than the average worker in the private sector.
• The top 1 percent of U.S. households own nearly twice as much of America's corporate wealth as they did just 15 years ago.
• In America today, the average time needed to find a job has risen to a record 35.2 weeks.
• More than 40 percent of Americans who actually are employed are now working in service jobs, which are often very low paying.
• or the first time in U.S. history, more than 40 million Americans are on food stamps, and the U.S. Department of Agriculture projects that number will go up to 43 million Americans in 2011.
• This is what American workers now must compete against: in China a garment worker makes approximately 86 cents an hour and in Cambodia a garment worker makes approximately 22 cents an hour.
• Approximately 21 percent of all children in the United States are living below the poverty line in 2010 - the highest rate in 20 years.
• Despite the financial crisis, the number of millionaires in the United States rose a whopping 16 percent to 7.8 million in 2009.
• The top 10 percent of Americans now earn around 50 percent of our national income.

http://www.businessinsider.com/22-statistics-that-prove-the-middle-class-is-being-systematically-wiped-out-of-existence-in-america-2010-7#83-percent-of-all-us-stocks-are-in-the-hands-of-1-percent-of-the-people-1
Posted by Marcel F. Williams at 10:21 AM 2 comments: