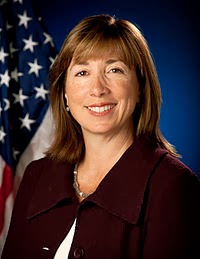 In a fascinating oped in the Huffington Post, former astronaut, Clayton Anderson, reports that  Lori Garver had a private meeting with the Astronaut Corp. when she was still the  Associate Administrator for NASA Spaceflight-- and asked the astronauts what NASA's next destination should be:

"While I was still an astronaut, and an astronaut veteran at that, then Associate Administrator for spaceflight Lori Garver came to speak to the Astronaut Corps. A private meeting, just Ms. Garver and an attentive group of type A personalities, I would venture to guess there were about 40-45 of us "space fliers" seated in the room. A bit of a "rah, rah" meeting, touting NASA's work in the world of commercial spaceflight (and I think commercial spaceflight is a good thing, but that's another op-ed!), she asked us all a significant question.

After some perfunctory remarks, she asked us to raise our hands if "we thought that Mars should be our next destination?" Three astronauts raised their hands.

Next, she offered the question again, but this time replacing the Red Planet with the option of an asteroid as our next destination. No one... that's right, no one, raised a hand.

When she finally asked us about our near-neighbor the moon, every astronaut, save the three that voted for Mars, raised their hands.

I found this interesting. The majority of the astronaut corps, the people that actually do the space flying, agreed with me --that the moon should be our next destination." Clayton Anderson.

You can read the rest of Clayton Anderson's oped at the Huffington Post at:

Where Do We Go From Here?

Huntsville-designed Space Launch System should be killed, former NASA No. 2 Lori Garver says
Posted by Marcel F. Williams at 9:14 AM