Within the Exclusive Economic Zones (EEZ) of remote US island territorial waters, centrally  mass produced subsea commercial nuclear reactors could be safely deployed and utilized to provide all of America's energy and industrial chemical needs.   In fact,  remote US territorial waters alone, could provide the American continent  and the rest of  the world with all of the  electricity,  transportation fuel, industrial chemicals, and fertilizers needed to sustain human civilization.

Anchored and moored above the seabed, approximately 100 meters below the water's surface, subsea nuclear power plants would be safe from damage from extreme temperatures,  hurricanes, earthquakes, and tsunamis, plane crashes and ship collisions.  And even if a subsea reactor is seriously damaged, no electricity is need for the reactor to passively shut down since it allows the natural cooling ability of the ocean to keep its fuel from melting.

Under this scenario,  subsea nuclear reactors, similar to the 250 MWe FlexBlue reactors proposed by France, could be clustered in groups of eight (2000 MWe) and under the control of a floating Control Center barge. Up to eight such nuclear complexes (nuplexes) would be placed along a circle four kilometers in diameter, producing as much as 16 GW of electric power.  Power plant employees living alone would be comfortably housed at one of two cruise ships positioned at the center of the surrounding circle of nuplexes (nearly two kilometers away) when they're not working.


Five to ten kilometers distant from the nuplexes, a variety of floating barges designed to produce carbon neutral synthetic fuels, industrial chemicals, and fertilizers would be deployed to utilize the nuclear electricity provided through submarine cables. Synplex and nuplex workers and their families could be housed in cruise ships positioned at least ten to twenty kilometers away from the nuclear synplex zones.

While the subsea reactor wouldn't be vulnerable during a hurricane, the Control Center barge floating on the surface above could disconnect from the under water reactors and easily towed to a safe region until the tropical storm has passed. That could also apply to the floating assets within the synplex zones, returning to reconnect with the nuclear grid once the hurricane has passed. Once a hurricane has formed, it can be tracked and scientists can usually predict its path 3 to 4 days in advance.

So any attempt at terrorism against a subsea reactor would require terrorist to pass through a privately protected synplex zone five kilometers wide and then pass through an inner Coast Guard protected area that's an additional five kilometers wide-- areas where ships not related to the synplexes or nuplexes would be forbidden to enter.  And if a subsea reactor somehow became extensively damaged, it would still be surrounded by the virtually infinite heat  sink of the ocean which would make the meltdown of its nuclear fuel-- impossible. 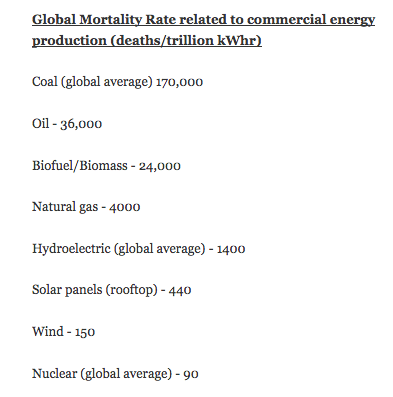 The deployment of specialized barges into Synplex Zones powered by Ocean Nuclear power plants could be used to produce:


Synplex zones could also be used to locate floating factories that could export their manufactured goods to ports located around the world.

Methanol manufactured from Ocean Nuclear Synplexes could use  methanol powered tanker ships to export methanol to coastal cities and towns around the world for the production of electricity.  Greenhouse gas polluting natural gas power plants can be easily and cheaply converted to burn carbon neutral methanol. Floating methanol energy barges could be used to quickly deployed to provide electricity to coastal towns and cities around the world. Such energy barges and methanol tankers could also be transported into the Great Lakes area of the US to provide carbon neutral electricity to interior states such as Ohio, Indiana, Illinois, Michigan, Wisconsin, and Minnesota plus the Canadian province of Ontario.

And if the CO2 from the flu gasses from methanol power plants are recovered and exported back to Ocean Nuclear Synplexes for the production of even more methanol, methanol power plants would be carbon negative (extracted carbon dioxide from the atmosphere for each new plant that is either deployed or converted to use methanol).

In the near future, a US state like California could export its urban and rural biowaste to a remote nuclear synplex located in the EEZ area of Wake Island. Nuclear electricity could be used to convert the  biowaste  into syngas through plasma arc pyrolysis. The syngas would be enriched with hydrogen produced from the electrolysis of water extracted from seawater in order to triple the production of carbon neutral methanol.  The methanol could then be exported to back to coastal cities and towns in  California to produce back up electricity for its future solar electric power plants. The recaptured CO2 from the flu gasses from the methanol power plants could be exported back the the Wake Island EEZ for the production of more methanol.  So methanol produced from nuclear electricity from the remote Wake Island EEZ could provide at least 70% of California's electric power needs while inland solar energy could provide the rest of California's electricity needs during the daylight hours when the skies are not significantly overcast. Carbon neutral methanol, gasoline, jet fuel, diesel fuel, and dimethyl ether produced from the Wake Island EEZ nuclear synplex zone could also provide California with all of its transportation fuel needs.

Posted by Marcel F. Williams at 7:20 PM No comments:

The Commercial Case for an SLS-B

by Marcel F. Williams
The Space Launch System (SLS) will only  be truly successful as a government and commercial heavy lift vehicle if its utilized in  a manner that takes full advantage-- of its inherent advantages. As a super heavy lift vehicle of the SLS should be capable of deploying  70 tonnes to 130 tonnes of payload to LEO (Low Earth Orbit). However, much simpler and cheaper SLS configurations could still  deploy at least 20 tonnes to 50 tonnes to LEO. In this article, I'll refer to a simpler and cheaper version of the SLS-- as the SLS-B.

The SLS-B would only consist of the SLS core vehicle plus the Exploratory Upper Stage (EUS).  Five expendable RS-25 engines would  be used for the SLS-B, one more than is utilized for the SLS heavy lift vehicle.   And such a basic SLS configuration should be  capable of deploying at least 20 tonnes of payload to LEO.

Twenty tonnes of payload capability would, of course, make the  SLS-B   fully capable of launching a variety of crew modules into orbit such as: Boeing's CST-100 Starliner, Space X's Dragon, and possible future crewed spacecraft such as Sierra Nevada's Dream Chaser. Such crew modules on top of the SLS-B would also allow several tonnes of additional payload within an expansive payload fairing with a maximum payload diameter of 7.5 meters, much larger that the 4.6 meter internal fairing diameter you'd get aboard the Falcon Heavy or the Atlas V.

The SLS-B could, therefore,  add an additional crew launch vehicle to America's fleet of Earth to LEO spacecraft, competing with the Falcon 9, the Atlas V, and the future Vulcan and Glenn launch vehicles.

As a purely liquid hydrogen and liquid oxygen fueled vehicle, the SLS-B  would have the environmental advantage of being  carbon neutral-- if its fuel is exclusively derived from nuclear or renewable electrolytically produced hydrogen and oxygen. The the SLS-B would, therefore,  be one of the most environmental benign launch vehicles in operation by not contributing to global warming, ocean acidification,  and global sea rise.

The increase in the demand for the SLS EUS, core stage, and RS-25 engines for sub-heavy lift flights should help to significantly reduce the vehicle cost for the SLS super heavy lift vehicle.

Of course, there is still the question as to whether  there will be enough launch demand for so many launch vehicles.

As far as crew launches are concerned, current demand by government agencies is relatively meager, with only four crew launches in 2017.  However, the potential passenger demand for space tourism could be substantial once private spacecraft of crew launch capability. There are currently more than 50,000 people in the world wealthy enough to afford a $20 million to $50 million ticket to orbit. If just 1% (500 individuals) of such individuals traveled into orbit every year, the demand would require at least 100 to 125 crew launches annually.

Commercial launch demand could be further enhanced by:

1. Starting a space lotto system: allowing adults to purchase dollar tickets for a trip to a private space station in orbit.

2. Deploying propellant producing water depots at LEO and EML1 (Such depots would require hundreds of tonnes of water to be launched from the Earth's surface annually)

3. Creating an international space agency that requires only $50 million in annual  dues from its member nations (If such an international agency only had twenty members and spent only half of its revenue on purchasing crew flights into space then ten to twenty people could be annually launched to LEO)

4. Allowing the US military to deploy astronauts from the armed services into space aboard facilities owned and operated by the DOD (Department of Defense): A mere $1 billion a year could allow ten to twenty military personal to fly into orbit annually.

Private operation and commercial utilization  of the SLS and SLS-B (Boeing, Orbital ATK, and Aerojet Rocketdyne?) would allow both vehicles to compete with launch vehicles deployed by Space X, the ULA, and other countries around the world.

The Case for an International Space Agency