Senate Hearing on Manned Missions to the Moon, Mars, & Asteroids

Posted by Marcel F. Williams at 6:27 PM No comments: 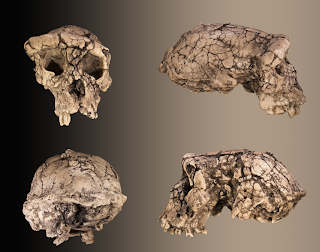 During the  82nd annual meeting  of the American Association of Physical Anthropologists on April 2 of  2013, an international group of scientist presented strong evidence that the 7 million year old North African fossil hominoid (humans and apes), Sahelanthropus tchadensis,  possessed numerous cranial features in it's brainstem, occipital lobes, and prefrontal cortex that are characteristic of hominins (humans the bipedal fossil relatives of humans). The reconstructed endocast of Sahelanthropus  was compared with other fossil apes, modern apes, australopithecines, and modern humans. The results of the  volumetric, linear and angular measurements strongly suggest that Sahelanthropus was indeed the earliest African human ancestor.

Since its discovery, some researchers were bothered by the early date of Sahelanthropus. The oldest fossil sahelanthropines are dated somewhere between 6.8 million and 7.2 million years before the present. Such an early hominin is particularly troublesome to those who are strict advocates of the molecular clock hypothesis which typically dates the human-chimpanzee divergence at less than 6 million years ago. However, there has been strong evidence that the molecular clock runs faster  in small  animals and, correspondingly,  slower in larger ones. Evidence of slower running molecular clocks have also been found in apes relative to monkeys.  So no molecular clock dates for human and ape divergences can really  be taken seriously unless the slower rate of mutation in humans and apes is accounted for.

Curiously, a slightly earlier swamp ape, Oreopithecus bambolii of Italy, had 15 significant cranial-dental similarities with Sahelanthropus. Oreopithecus was also the earliest bipedal hominoid in the fossil record. This fossil Italian  ape lived in geographic isolation on the  Mediterranean island of Tuscany-Sardinia  for at least 2 million years. Sahelanthropus suddenly appears in the fossil record in North Africa just around the time when Tuscany became part of the Italian peninsula  which was also during a time when  Italy was  was geographically connected to North Africa after global sea levels began to fall between 7.2 and 7.1 million years ago. Global sea levels continued to fall, eventually isolating the Mediterranean basin from the Atlantic Ocean around 6.1 million years ago.

Our Earliest African Ancestor
Posted by Marcel F. Williams at 8:00 PM No comments:

Posted by Marcel F. Williams at 9:28 AM No comments: