Uranium from Seawater as an Unlimited Source of Renewable Energy

Approximately 4% of the energy currently consumed by human civilization is provided by commercial nuclear power.  Less than 28 tonnes of slightly enriched uranium is required to fuel a one gigawatt (1000 MWe) nuclear reactor  per annum. But only 0.72% of natural uranium is comprised of the fissile uranium 235 needed to initiate nuclear fission. So fertile uranium 238 has to be enriched with uranium 235, up to 3 to 5%,  in order to be utilized for power production in light water reactors.  Up to 226 tonnes of uranium oxide would have to be mined in order to be processed into  196 tonnes of metallic uranium that would later be enriched into just 28 tonnes of useful nuclear fuel. So approximately 75,000 tonnes of uranium oxide is mined annually to provide just 4% of the world's total energy needs. 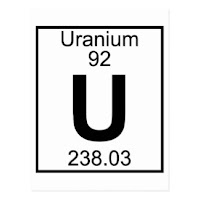 The reprocessing of spent fuel (fissile uranium and plutonium) from commercial nuclear reactors could slash uranium demand in half, providing more than two centuries of uranium supply at current levels of use. However, using terrestrial uranium and spent fuel recycling  to provide all of the world's energy needs with current light water reactor. So the current generation of nuclear reactors could not utilize-- terrestrial uranium-- to completely supplant the environmentally harmful fossil fuel economy that is causing global warming and global sea rise.

Countries with the largest uranium reserves by metric ton (tonnes)

However, the next generation of  Fast Neutron Reactors could produce 30 to 60 times as much energy as current commercial nuclear reactors. And at current rates of global energy use, that could allow terrestrial uranium to power human civilization on Earth for more than 600 years. Fast Neutron Reactors could also use thorium in combination with uranium to power human civilization for more than a thousand years.

But while affordable terrestrial sources of  uranium are less than ten million tonnes, the world's oceans contain more than 4 billion tonnes of uranium-- naturally dissolved within seawater. Utilized in  Fast Neutron Reactors, that would be enough nuclear fuel to power human civilization for more than 300,000 years. And marine uranium would still be able to power the current generation of nuclear reactors, with spent fuel recycling, for about 10,000 years.

However, uranium from seawater is also an intrinsically renewable source of energy. The world's oceans naturally contain uranium dissolved at a concentration of about 3 parts per billion. But the amount of uranium content within marine waters is controlled by a  steady state chemical interaction  between water and rocks on land and in the ocean. So no mater how much uranium is extracted from the ocean, the uranium concentration in seawater remains the same because of its continuous  interaction with the Earth's crust that contain approximately 100 trillion tonnes of uranium. That's a 7.5 billion year energy supply if   Fast Neutron Reactors are utilized or a mere 250 million year supply of fuel to power all of human civilization  using current commercial nuclear power technology and reprocessing.

Of course, in about a billion years, the ever increasing temperature of the sun will cause the oceans to boil. This will make the Earth-- uninhabitable-- long before the sun turns into a red giant.  So, basically,  there's  more than enough renewable marine uranium to power all of human civilization on Earth until the end of life on Earth!

Pacific Northwest National Laboratory and LCW Supercritical Technologies have recently had a major breakthrough in their uranium extraction from seawater research. They've managed to extract five grams of yellowcake from seawater by using acrylic fibers. The inexpensive yarn they've developed is both durable and reusable with an innate ability to selectively absorb uranium from seawater. And the material also appears to perform much better in warmer water where the extraction rate could be three to five times higher than in cold water. This could make the extraction of uranium from warm marine waters compatible with Ocean Nuclear Power production in remote tropical waters. Researchers at the Pacific Northwest National Laboratory believe that the acrylic material that they've developed could be ready to be a manufactured on a commercial scale in about 10 years.

How Much Fuel Does It Take To Power The World?

Posted by Marcel F. Williams at 6:12 PM No comments:

Posted by Marcel F. Williams at 8:29 PM No comments: