Frank Capra Film Warns of Global Warming Way Back in 1958

Frank Capra Filmography
Posted by Marcel F. Williams at 9:11 AM No comments:

Today, more than 180 small nuclear reactors power more than 140 sea vessels (submarines, aircraft carriers, and icebreakers) on the Earth's oceans. Nuclear power plants have been cruising the high seas since the United States Navy first deployed the USS Nautilus, the world's first nuclear submarine, in 1955. More than 12,000 reactor years of operation in the marine environment has been accumulated from floating nuclear reactors since the 1950's. Although originally designed for naval use, the US Army operated Pressurized Water Reactors from 1954 until 1974.  But the success of the Navy's Pressurized Water Reactors eventually led to the first commercial nuclear reactors in the US.

Since the early 2000s, the Russian Federation has been working on the deployment of centrally mass produced floating nuclear power plants. With operating lifespans of 40 years, these floating nuclear barges are to be designed to produce 70 MW of electricity or 300 MW.  While these floating nuclear power plants are initially designed to be used in the Russian Arctic regions, Rosatom, the State Atomic Energy Corporation, has reported that nations such as:  China, Indonesia, Malaysia, Algeria, Namibia, Argentina,  and Cape Verde have shown interest in such floating reactors.


Now Chinese nuclear company, CGN (China General Nuclear), has announced that its  ACPR50S reactor design has received approval by China's National Development and Reform Commission.
The construction of CGNs first floating reactor is expected to start in 2017, with electricity generation to begin in 2020. The reactor is being developed in order to supply 60 MW of electricity or 200 MW of heat for desalination.

In October of 2015,  Lloyd's Register of the UK announced it had signed a framework agreement with   a subsidiary of China National Nuclear Corporation (CNNC) - to support the design and development of a floating nuclear power plant based on a  100 MWe design.

But the United States is actually no stranger to floating nuclear power production. A US Antarctic base was powered by a 1.5 MWe marine reactor from 1961 until 1972. From 1967 until 1976, a 12,000 tonne ship that was originally built in 1945 was used as a floating nuclear power plant, supplying power on Gatun Lake in the Panama Canal Zone. The ship supplied 10 MWe of electricity for the Canal Zone for nine years.

44% of the world's population lives within 150 kilometers of  marine coastlines. In a world facing the dangers of global sea rise and ocean acidification due to the use of fossil fuels,  centrally mass produced floating nuclear power plants could easily be deployed near coastal towns and cities around the world to produce carbon neutral electricity. And there is enough uranium in seawater to meet all of the world's energy needs for more than three thousand years (more than 5000 years if the spent fuel is reutilized). The use of thorium could add  another 2800 years.

Floating nuclear power plants also  have the safety advantage of not being vulnerable to earthquakes or tsunamis.  Additionally, the endless heat sink of the ocean environment would make nuclear meltdowns impossible.

However, potential terrorist attacks on such facilities is likely to stoke some degree of nuclear phobia amongst the populace-- even though such an attacks are unlikely to cause any significant environmental damage. The political consequences, however, could have significant economic consequences for the nuclear industry.

Protection of a floating nuclear facility could be significantly enhanced by surrounding them with enormous floating  tubular cement modules such as those proposed by the US Navy for constructing ocean aircraft platforms and artificial islands. Each floating cement module for the naval platforms were supposed to be 20 meters in diameter an nearly 80 meters tall!  And each floating module could be assembled in a variety of configurations. The assemblage of  such statuesque structures could  enhance the protection of  floating nuclear power plants both above and the below the water.

But nuclear phobic anxieties could be further reduced by simply moving floating nuclear  facilities out of the visual range of the coastline.   Most proposed floating nuclear facilities are usually positioned just 10 to 20 kilometers off the coast. But the relatively low cost of submarine cables could  make the  largest ocean nuclear power facilities (1000 MWe plus)  economically viable even if they were located a 1000 kilometers away from the coastline. Less than 300 kilometer off the coast would be well within a nations economic exclusion zone.

On the other hand,  floating nuclear power plants wouldn't have to be near any coastline  if they were simply used to produce synthetic carbon neutral fuels. Far out to sea, floating nuclear power plants could utilized to produce carbon neutral: methanol, gasoline, diesel fuel, jet fuel, and dimethyl ether. These synthetic fuels could be produced through the pyrolysis of garbage and sewage imported from coastal towns and cities. The syngas produced from the pyrolysis of the biowaste and plastics could then be converted into a variety of synthetic fuels. But the production of synfuels could be greatly enhanced  by adding hydrogen to the syngas produced through the electrolysis of seawater.

However, the US Navy has recently developed a technology that could produce carbon neutral synthetic fuels by solely using electricity and seawater, taking advantage of the high levels of carbon naturally present in seawater. 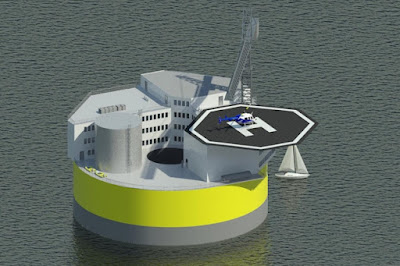 MIT has recently developed a concept for two types of floating nuclear power plants, a 45 meter in diameter 300 MWe power plant and a 75 meter in diameter 1100 MWe power plant. Large remotely located nuplexes consisting of several 1100 MWe floating power plants could supply all of the energy needs of coastal cities, towns, and islands throughout the world. And even substantial amounts of  the continental interiors of North and South America could be supplied with carbon neutral fuels from floating nuclear facilities via the transport of fuel up large river systems connected to the oceans.

While there are good economic reasons for the US to invest in floating nuclear power plants, the US Navy, for more than a decade,  has  expressed a desire to switch from fossil fuels to carbon neutral synthetic fuels  for both environmental and strategic reasons. The US Navy's desire for ocean nuclear synfuels  could be the means to get an Ocean Nuclear industry started in America.

Through the urging of the DOD and the US Navy, Congress could pass a law offering funding to  private US and allied industries to develop  floating nuclear power plants ranging from 100 MWe up to 2500 MWe   for the production of carbon neutral aviation fuels and other carbon neutral synthetic fuels for the US armed forces. The US Navy could agree to  purchase carbon neutral jet fuel  from floating nuclear facilities for all of its liquid fuel needs once such carbon neutral fuels are available.

Such legislation could help the US Navy meet its environmental and strategic goals while also helping to develop a new carbon neutral  synthetic fuel industry,  the way the US Navy helped to develop the nuclear industry back in the 1950s.

A new look for nuclear power


UN Atlas: 44 percent of us live in coastal areas

Posted by Marcel F. Williams at 3:32 PM No comments:

Congressional Hearing on NASA's Ability to Get Humans to Mars

Charting a Course in Human Exploration

Posted by Marcel F. Williams at 3:11 PM No comments: