In July of 2016, researchers on the health of NASA astronauts dropped a bombshell concerning the cardiovascular mortality of the Apollo Lunar astronauts. Despite the enhanced levels of radiation exposure by astronauts at LEO and beyond LEO, there were no indications of increased levels of cancer for space faring astronauts relative to people living on Earth. The research also showed no significant increase in cardiovascular deaths (the leading cause of death for Americans) relative to people living on the Earth's surface. Surprisingly, the research did reveal that the  frequency of  cardiovascular deaths of Apollo Lunar astronauts was four to five times higher than in LEO astronauts and in NASA astronauts that have yet to have the opportunity to fly into space.

Although astronauts are exposed to enhanced levels of radiation beyond the Earth's magnetosphere, astronauts at LEO are completely shielded from the most lethal component of cosmic radiation, heavy nuclei (heavy ions), most of the time.

Cosmic rays are relativistically accelerated particles  resulting from the  explosions of ancient super nova mostly within the galaxy. Approximately 87% of cosmic radiation particles are composed of  protons;  12% are alpha particles derived from helium atoms.  But approximately, 1% of the population of cosmic rays are composed of heavy nuclei, large ionized accelerated particles derived from heavier nuclei such as carbon, oxygen, silicon, and iron.

Most of the protons and alpha particles from cosmic radiation pass harmlessly though the vacuous space between the atoms of the human body. But the relentless rain of cosmic radiation inevitably results in impacts upon our corporeal components. Heavy nuclei, on the other hand,  have relatively-short interaction lengths when encountering matter. Such interactions with human tissue can be significantly deleterious DNA molecules and can pose a challenge to cellular repair.

It has been estimated that during a future-- 6 month-- journey to Mars, the nucleus of  one out of every three  cells in the human body would receive at least one hit from a cell damaging heavy ion. With the inability of neurons to repair themselves, it has been predicted that a mere six months of heavy nuclei exposure could potentially destroy a third of the total neurons in the central nervous system.

Approximately, 15 to 20 g/cm2 of mass is required to effectively stop the penetration of heavy ions. However, its estimated that Astronauts aboard the Apollo Command Module (CM), were only provided with about 10 g/cm2 of radiation shielding. And some parts of the Command Module were more heavy shielded than other areas of the CM. The window areas were particularly thinly shielded which would have allowed heavy nuclei to easily penetrate into the CM interacting with the body tissues of the astronauts.

Astronauts on there way to and from the Moon experience retinal flashes aboard the CM when they were outside of the Earth's magnetosphere. And NASA believes that this was the result of heavy nuclei traversing the human retina. Retinal flashes occurred at an average frequency of every 2.9 minutes which sometimes made sleeping a challenge for the astronauts.  At least 90% of the Apollo astronaut's exposure to heavy nuclei bombardment occurred during their voyage to and from the lunar surface and not on the lunar surface itself.

Since the cardiovascular health of  Apollo Lunar astronauts relative to humans on Earth has now been shown to be significantly effected after less than two weeks beyond the Earth's magnetosphere, its now clear that astronauts in the future will have to be adequately protected from heavy nuclei when traveling beyond the magnetosphere to the Earth-Moon Lagrange points, the lunar surface and on interplanetary journeys to Mars.

Since there is virtually no atmosphere on the surface of the Moon, lunar astronauts venturing outside of their regolith shielded habitats would be exposed to the relentless penetration of heavy nuclei. Lunar astronauts would, therefore, have to wear pressure suits with enhanced shielding (~ 20 g/cm3). Helmets could easily be shielded with iron 2.6 cm2  thick.  But the helmet visor for lunar excursions would probably have to be composed of lead iron glass nearly 5 centimeters thick. Thickening the rest of the lunar pressure suit with 2.6 centimeters of iron shouldn't be too difficult. The increased weight of the iron shielded pressure suit should be easily mitigated by the Moon's 1/6 gravity.


Since traveling from LEO to other important regions within cis-lunar space can take several days, its pretty obvious that crewed spacecraft traveling within cis-lunar space will have to be  appropriately shielded against heavy nuclei. However, substantially increasing the shielding requirements of the Orion spacecraft to protect against heavy ions  could make it to heavy for the   ATV derived  Service Module (SM) to push the Orion capsule on a trajectory return to Earth. 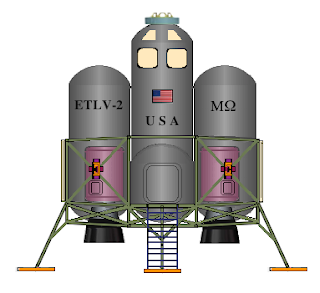 However, if the ATV derived SM is replaced with a reusable EUS that uses IVF technology and orbiting water/propellant depots, then the Orion capsule  could be coupled with an appropriately water shielded Cygnus habitat.  The water shielded (20 cm thick) area within the Cygnus habitat could be dumped just before the final trajectory burns into the desired cis-lunar destinations. Water could be replenished for the Cygnus habitat for return trips at the water/propellant depots.


In the long run, however, it would be even more fuel efficient if an Extraterrestrial Landing Vehicle (ETLV) were also used as an orbital transfer vehicle between LEO and the Lagrange points. Again, 20 centimeters of water shielding could be provided with an designated area of the ETLV and then dumped before the final trajectory burns to the Lagrange points, Low Lunar Orbit, or to LEO. While water shielding  the ETLV crew transport area before its departure from the lunar surface would require more propellant at take off, there should be no shortages of lunar derived oxygen and hydrogen propellant on the lunar surface.

And ETLV using a ADEPT or HIAD deceleration shield could dump its water shielding just before entering Mars orbit or descending from from Mars orbit to the surface of Mars. Returning to Mars orbit, an ETLV could dock with a Mars orbiting water/propellant depot at Low Mars Orbit to add water shielding and propellant to the vehicle in order for it to return its astronauts to an interplanetary spacecraft parked in High Mars orbit.

Protecting astronauts from the deleterious effects of heavy ion bombardment beyond the Earth's magnetosphere will increase mass shielding and propellant requirements for crewed spacecraft. But  the utilization of extraterrestrial water and regolith resources should make it easy and affordable to protect the health of astronauts from the dangers of heavy nuclie in the New Frontier.

THE MARTIAN RADIATION ENVIRONMENT FROM ORBIT AND ON THE SURFACE.

The SLS and the Case for a Reusable Lunar Lander

Posted by Marcel F. Williams at 9:33 AM No comments: