Posted by Marcel F. Williams at 8:58 PM No comments:

Oceans Beyond the Earth

Posted by Marcel F. Williams at 9:19 AM No comments:


At an estimated cost of $165 billion (in today’s dollars), the International Space Station (ISS) is considered to be the most expensive human made structure ever built. Requiring more than 40 rocket launches for assembly, the ISS currently has a pressurized volume exceeding 916 cubic meters. Yet, a single launch of a basic SLS Block IB Cargo launcher could easily deploy a dry workshop microgravity habitat with a pressurized volume exceeding 2000 cubic meters.  But even if a habitat was deployed with multiple pressured cylindrical sections to enhance safety plus air locks for docking, a single SLS launched dry station or multiple dry stations would still have total pressurized volumes far exceeding that of the ISS.

However, if  the empty LOX and LH2 tanks of the SLS core stage core stage, used to place the dry habitat or habitats into orbit, were re-pressurized with a nitrogen/oxygen atmosphere, an additional  pressurized   volume exceeding 3000 cubic meters could be added. So in combination, a dry/wet  workshop habitat deployed by a single SLS launch, could easily provide a total pressurized volume ranging from 4000 to 5000 cubic meters, more than four to five times the pressurized the volume found on the ISS. 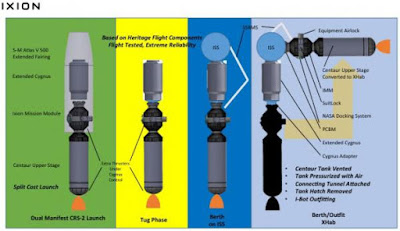 Flexcraft (single manned transport vehicles) could be used by an astronaut residing in one section of the habitat to visit the other large section.  But larger transport vehicles using thrusters could be deployed to the mega habitat by commercial launch vehicles. Such vehicles could conveniently transport up to six astronauts from one section of the other using waste carbon dioxide or hydrogen to power the thrusters.

The two propellant tank derived wet workshops could be immediately utilized for  microgravity recreation and for stowage, allowing more of the dry workhop areas to be used for human occupation.


The linear docked workshop could have four docking ports plus a windowed Cupola for viewing the Earth. Attached to the repurposed LOX tank would add more than 800 cubic meters of additional pressurized volume that could be used for  microgravity recreation and for storing food, water, extra pressure suites and equipment plus the garbage and biological waste that are continuously produced by the stations inhabitants.


A DWS habitat docked with he LH2 tank could have five docking ports with an additional pressurized volume exceeding 2000 cubic meters. The substantially larger living space could prompt more elaborate use of the wet station area. Additional divisions could be built inside of the enormous wet workshop to provide additional private rooms and work areas for occupants.  Crops and even fruit trees as tall as 4.2 meters (13 feet 9 inches tall) could be planted along the walls of the wet workshop to grow fruits and vegetables for the station.

Conceivably, one section of the mega orbiting habitat could be exclusively used for NASA and US military astronauts (US Space Corp?) while the other section with the Cupola could be utilized exclusively for space tourism.

Propellant depots, space laboratories, and even zombie satellites that need to be refurbishment or repaired could be redeployed near the mega habitat, perhaps a few hundred meters or a few kilometers away,  in the same orbital arc. Flexcraft or Mini-Transports could be used to transport personal staying at the space station to nearby space laboratories or to a malfunctioning satellite in need of repair that has recently been deployed near the space station.

Crewed reusable orbital transfer vehicles designed to travel to other regions of cis-lunar space  could dock with the mega station until they are ready to be refueled at a nearby orbiting propellant depot before traveling to an Earth-Moon Lagrange point or Low Lunar Orbit.

Polls conducted in 2018, suggest that 42% of Americans would like to travel into space. But world wide, there are only about 52,000 people who could actually afford to do so. But that still suggest that there may be 22,000 people who would like to travel into space and have the money to pay for it. Annually, if just 10% of the super wealthy who desired to travel into space (2200 people) payed to visit an orbiting habitat,  that would require a prodigious 440 to 550  commercial launches every year. That, of course, doesn't include the number of unmanned launches needed to provide such habitats with food and water and other supplies.  But even if a mere 1% of the wealthy who desired to travel into space purchased rides to a space habitat every year,  that would require 44 to 55 private commercial launches annually.

If the owners of space habitats charged  $4 million for a ten day stay, that would only represent less than 10% of the cost to a customer assuming the cost of traveling to and from orbit is around $50 million. So orbiting habitats could make $24 million for a ten day stay for six people (tourist plus pilots).  So if they accommodated customers every ten days, such a habitat could make more than  $864 million in revenue every year for just 36 flights per year.  Additional revenue could, of course, be made for providing accommodations for NASA and Space Corp astronauts in the other section of the mega habitat.

Manufacturing of the International Space Station

Posted by Marcel F. Williams at 9:41 AM No comments: