In my opinion, the development of the Ares V is NASA's most important project. The worse mistake the US ever made was decommissioning our only heavy lift vehicle (the Saturn V) back in the early 1970's. The Saturn V not only put men on the Moon but placed America's first space station (Skylab) into orbit. During the gap between the Apollo moon program and the Space shuttle program, we could have used the Saturn V to launch more Skylabs and the first large rotational simulated gravity space stations.


By the time the Space Shuttle program had begun, it would have already had a space station or stations to visit. Then we could have used the Saturn V in combination with the Space Shuttle to set up a permanent base on the Moon during the 1980s using reusable OTVs (orbital transfer vehicles) and reusable lunar landers. The 1980's could have been the greatest space era in American and world history.

With the development of the Ares V, America will once again have heavy lift capability again. The Ares V will enable us to launch over 180 tonnes into low earth orbit (Skylab only weighed 77 tonnes); 70 tonnes into lunar orbit; and between 15 to 20 tonnes on the lunar surface. The Ares V will give America the ability to begin the human colonization of the Moon and the ability to exploit the natural resources of the moons of Mars in order to make a lunar colony independent of the Earth's resources. 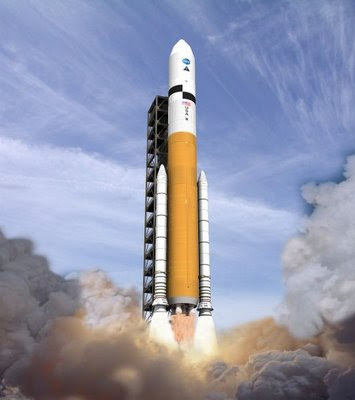 NASA's $19 billion a year budget (less than two months in Iraq) may not have enough money in it for the Ares V. The replacement for the Space Shuttle, the Ares 1, may cost over $40 billion dollars over the next 6 years. Our commitment to the International Space Station (the mission to nowhere) is going to cost over $2 billion a year.


If I were Charles Bolden, Obama's new NASA administrator, I would:

1. Prioritize funding for the Ares V in order to accelerate the its development.

2. I would change the Constellation lunar sortie program to a lunar base program with a prefabricated lunar facility already built and properly shielded by robots sent by the Ares V before the first astronauts arrived on the lunar surface.

3. I would ask Obama to add an extra $4 billion a year specifically to fund the Ares V and the lunar base program. And if he said that he couldn't raise the NASA budget then I'd recommend that the money come from reducing our commitment to the ISS and ending the development of the Ares 1 and replace it with the much cheaper man rating of one of the Delta Heavy vehicles. 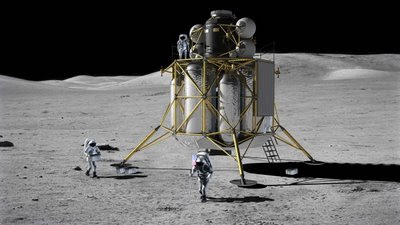 It would be nice to have humans return to the Moon and to a permanent facility during the last year of the Obama administration in 2016. But I guess I'd be satisfied if America had a moon base at least before the year 2020. John Kennedy got us to the Moon in 8 years using primitive 1960's technology. So I would be extremely disappointed if it took America more than a decade to establish a permanent human presence on the Moon-- our closest celestial neighbor and the gateway to the solar system.

Robots Could Build a Base on the Moon 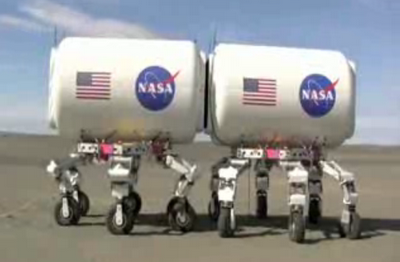 Two ATHLETE robots joining twin habitat modules together
Establishing a permanent and continuously growing human presence on the surface of the Earth's moon could be a pivotal point in human cultural evolution. Humans could utilize the lunar regolith to produce oxygen for breathing and as a chemical component of water. Additionally 5 to 10 meters of lunar soil could be used to shield lunar habitats from the deleterious effect of cosmic radiation. If humans living at a lunar facility for several years can remain healthy and perhaps even reproduce under the Moon's 1/6 hypogravity environment then humanity will no longer have to confine its existence to the surface of the Earth, allowing us to expand human civilization to the Moon, Mars, and perhaps Mercury which should greatly enhance the survival of the human species in the solar system.

The moon also has some industrial potential since it requires at least 20 times less energy to launch a satellite into Earth's orbit from the lunar surface than from the Earth's surface. Satellites are at the core of the trillion dollar telecommunications industry. So if satellites could eventually be manufactured and launched from the lunar surface then lunar colonies could someday dominate the satellite manufacturing, satellite launching, and perhaps even the satellite repair industry. Tourism and even the burial of human ashes on the Moon could also be potential multi-billion dollar lunar industries in the future.

How difficult would it be to set up a lunar base?

It may be a lot simpler and cheaper than we imagine-- if we let remote controlled robots do all of the hard work even before humans arrive. Just one launch from NASA's future heavy lift vehicle, the Ares V, could place between 15 to 20 tonnes of payload on the lunar surface. So a fully functioning lunar facility capable of accommodating perhaps 10 astronauts at a time for a year or more would probably only require three or four launches of the Ares V-- excluding the manned launches required to bring the astronauts to the lunar surface. Of course the astronauts should be attempting to live off the land as much as possible by manufacturing their own oxygen from the lunar regolith. But the Ares V could launch another 20 tonnes of food and water if they ran short.

Humans require approximately 3 kg of water per day, 2.8 kg of oxygen per day and 1.8 kg of food per day: 2.8 tonnes of water, oxygen, and food for each individual on the moon annually. Obviously, if oxygen and water can be recycled to some degree then supplies would last longer. And if oxygen can be efficiently manufactured from the lunar regolith then oxygen wouldn't have to be imported from Earth at all and only the small hydrogen component of water (11%) would have to be shipped from Earth in order to manufacture H20 on the lunar surface.

To assemble these bases, NASA could use the emerging ATHLETE robot technology. The spider-like ATHLETE robots and other remote controlled vehicles could assemble and properly shield the lunar base with lunar soil. These robots could also travel practically all over the vast lunar surface, thousands of kilometers away from the manned lunar base, collecting rocks and soil samples from different regions of the moon and then returning those samples back to the lunar base for eventual export back to Earth for study.

NASA may scrap plans for a Permanent Moon Base

ATHLETE Robot
Posted by Marcel F. Williams at 2:04 AM 2 comments: