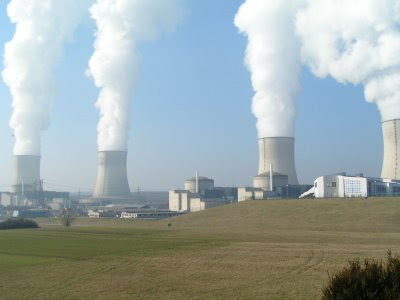 by Marcel F. Williams
Because of the dangers of climate change and America's dependence on foreign oil, there's been a lot of speculation about a nuclear renaissance in America and in the rest of the world. The advantages of nuclear power are numerous. Nuclear power produces no greenhouse gases, takes up extremely little land area relative to renewable energy sources, produces 100 times less radioactive waste than coal power plants, and thousands of times less toxic waste than coal power plants.

Cheap electricity from nuclear power also enables us to produce hydrogen through water electrolysis that can be combined with carbon from biomass or from the extraction of carbon dioxide from the air for the production of carbon neutral gasoline, diesel fuel, aviation fuel, methanol, and dimethyl ether.

If our planet were totally powered by once through uranium reactors there would only be enough terrestrial uranium to power human civilization for 15 years. But if uranium extracted from sea water were utilized, then our entire civilization could be powered for more than 3600 years. If the spent fuel from these reactors were also utilized, as they are in France, then nuclear power could supply the world with all of its energy for over 5000 years.

So even without a new generation of nuclear breeding technologies that could allow us to power the entire planet forever, current nuclear technology could power our planet for at least 5000 years at current levels of energy use and for more than 1600 years if global power consumption was three times our current level.

So its easy to see why numerous countries around the world are interested in either acquiring or expanding nuclear power. However, in the US, the ability to significantly expand nuclear power faces financial and political obstacles that could eventually leave Americans far behind Asia and Europe as the world tries to move towards a non carbon dioxide polluting energy economy.


The US, which created and pioneered the development of nuclear
energy and provided it to the rest of the world, now ranks behind more than ten other countries in the percentage of electricity derived from that technology. Even though the United States has more nuclear reactors than any other nation, as mentioned above, the US produces only 20% of its electricity through nuclear power.

In the US, however, the ability to significantly expand nuclear power faces financial and political obstacles that could eventually leave Americans far behind Asia and Europe as the world tries to move towards a non carbon dioxide polluting energy economy. Jason Ribeiro's recent blog States with Laws that Impede Nuclear Power points out some of the political obstacles in each state that impede the construction of more nuclear reactors in several states.

The problem of spent fuel and nuclear waste is largely a political problem rather than a scientific or technological one, IMO, which I addressed in my article Short & Long Term Solutions for Nuclear Waste . And the best way to decommission a nuclear reactors is to simply allow irradiated parts of the reactor to safely decay over a period of about 100 to 150 before safe dismantling.

However, the unpredictable cost of capitalizing new nuclear reactors is a cause for concern. Estimates for a new single 1000 MWe nuclear reactor in the US have ranged from less than two billion dollars to as high as over 10 billion dollars. Charles Barton has recently addressed this on his Nuclear Green blog: Are Nuclear Costs Unreasonable?

In my opinion, the fact that US nuclear facilities rely too much on private capital is the biggest obstacle to nuclear power expansion. In the US, there are hundreds of utilities that are generally too small to be able to risk the large capital investment required to build nuclear facilities. In a country like France on the other hand , a single government owned utility provides electricity for the entire country.

The French government owns and operates 59 nuclear power plants which produce over 78% of France's electrical power. France is also the world's largest net exporter of electric power, exporting 18% of its total electricity production to Germany, Italy, the Netherlands, and Britain. France's carbon emissions per kWh are less than 1/10 that of pro-renewable energy countries like Germany and the UK, and 1/13 that of Denmark, which doesn't have any nuclear plants.


The US government also owns a few nuclear facilities via the TVA. And this federal public power corporation was the last utility to build a nuclear power plant in American and is now the first to order the new AP1000 Westinghouse (Toshiba) reactors.

With the desperate need for the US to move towards energy independence from the fossil fuel economy, I believe that it is time for the federal government to move aggressively towards helping to fund new nuclear reactors. Under the new Obama administration, I believe the federal government should provide up to 45% of the investment capital for new nuclear reactors on existing sites.

Alvin Weinberg proposed an existing-site policy back in 1979 as the best way to expand nuclear power in the US. By simply increasing the number of nuclear reactors at existing nuclear sites already in operation, the US could increase its nuclear capacity up to 343 Gwe. That's more than triple current nuclear capacity and would allow America to power nearly 70% of its electricity from nuclear sites that already exist.


In the long run, however, I believe the best way to keep the cost of electricity low in the US for baseload distribution and for synfuel production while finally achieving total energy independence from the fossil fuel economy , is to build multiple reactors within nuclear parks (nuplexes) consisting of 10 to 40 reactors and which include enrichment and spent fuel reprocessing facilities and on site nuclear waste storage facilities. While I strongly believe that nuclear power facilities should continue to be built and operated by private industry, I also believe that nuclear parks (nuplexes) should be capitalized and owned by the Federal government.

That's why I favor the creation of a Federal Nuplex Corporation (FNC). I will elaborate in more detail on this nuclear electricity and synfuel concept in an upcoming post because I believe that it is the cheapest, safest, and most energy productive way of achieving energy independence in the United States.

7. The Economics of Nuclear Power

8. Fueling our Nuclear Future
A New Papyrus Publication
Posted by Marcel F. Williams at 12:28 AM

In fact the government owned TVA is taking the lead in adding nuclear capacity. Last year TVA brought an old, rebuilt reactor back on line sfter a 20 year shutdown. At present TVA is working on completing an incomplete reactor left over from the first nuclear era, and considering finishing to more. in addition, TVA also has applied for a license to build two new AP=1000 reactors. If all of these reactors guilt built of finished on a timely nasis, TVA could have as many as 5 new reactors on line by 2020.

There's talk about huge amounts of federal investment in our energy infrastructure. And the TVA appears to be leading the charge in the right direction.

I would have no inhibitions if the Obama administration invested about 10 to 15 billion dollars annually in nuclear power capitalization with non federal regional utilities as long as those states and utilities provided the majority of the capital.

But if the government supplies all of the capital, TVA, style, I hope they go in the direction of large nuplexes in order to substantially reduce capital cost for synfuel production.

But if this new administration is serious about energy independence then 10 to 15 billion a year for nuclear plus an additional 10 to 15 billion dollars annually for Renewable Energy investment (small hydroelectric, biowaste, wind, solar, geothermal)is going to have to be spent over the next few decades.

You are right about the need for a strong TVA-style role by government in the expansion of nuclear power. I appreciate your efforts on behalf of energy independence. This post makes an excellent case for a nuclear renaissance.