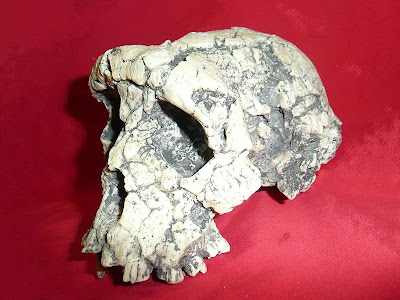 In 2002, Nature magazine announced to the world that French paleontologist, Michel Brunet, and his colleagues had discovered the fossil cranium of the earliest human ancestor. The fossil remains of a skull and jaw had been found on July, 19, 2001, in the Djurab desert in the Central African country of Chad by a Chadian student (Ahounta Djimdoumalbaye) working with the Brunet team. The president of Chad named it Toumai (hope of life), a nickname often given to Chadian children born in the dry season. But Brunet's team named it Sahelanthropus tchadensis after the African region that borders the African savanna and the Sahara desert and after the nation where it was found.

Sahelanthropus was originally dated at between 6 to 7 million years old. But the most recent estimates have determined that the fossil skull and the other hominins remains were between 6.8 and 7.2 million years old. This would make Sahelanthropus older than later fossil hominins Ardipithecus and Australopithecus and, therefore, the oldest fossil human ancestors ever found in Africa. 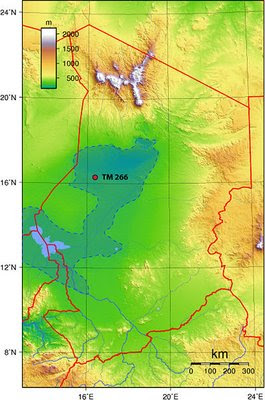 Some researchers, however, have questioned the hominin (humans, human ancestors, and close non-ape human relatives) status of Sahelanthropus, arguing that the fossil hominoid may actually be more closely related to the gorilla or the chimpanzee rather than to humans and their non-ape human relatives such as Australopithecus.

Evidence that the angle of the foramen magnum (the large opening at the base of the skull forming the passage from the cranial cavity to the spinal canal) relative to the orbital plane of the skull in Sahelanthropus is similar to that found in bipedal humans and bipedal hominins such as Australopithecus africanus and Australopithecus afarensis adds further evidence that the 6.8 to 7.2 million year old Sahelanthropus tchadensis was probably the earliest African ancestor of the human species.

7. An Ape or the Ape: Is the Toumaï Cranium TM 266 a Hominid?
(2006) Wolfpoff, Hawks, Senut, Pickford, Ahern- Paleoanthropology

Excellent blog - which I just found through Evolving Complexity. I'm just an entomologist with an armchair interest in paleoanthropology, but you've just made my (short) 'evolution' blogroll.

I believe that the 21 million year old Morotopithecus remains are still too meager to determine if the ancient ape was an obligatory biped. I am, however, not surprised that the most ancient hominoids show more morphological characteristics related to bipedalism relative to monkeys and some later hominoids.

The fact that all of the extant great apes are either knuckle-walkers or fist walkers tells me that the earliest hominids (great ape/human clade) were probably not obligated bipeds even though chimps and gorillas appear to have become knuckle-walkers independent of each other.

There is also evidence that the direct ancestors of the hominins (humans and australopithecines) were also knuckle-walkers.