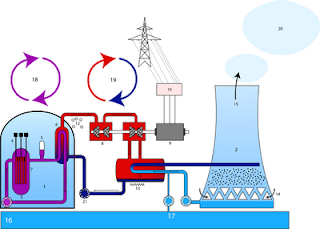 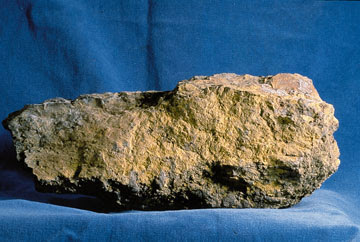 Nuclear power produces approximately 20% of the electricity in the US and represents approximately 6% of the world's energy consumption. Uranium currently sells at below $35 per kilogram on the world market. But it is estimated that there are approximately 5.5 million tonnes of proven uranium reserves at a cost below $130 per kilogram. With the resurgence of nuclear power, however, it is estimated that the exploration for new uranium sources would increase total reserves to more than 16 million tonnes. The current world demand for uranium is 65,000 tonnes per year. So there should be enough uranium to supply current global nuclear power facilities for 246 years.

Countries with the most abundant uranium supplies
But if nuclear power were required to supply the world's total energy needs, 1.1 million tonnes of uranium would be required annually. So these terrestrial uranium reserves could only power our planet for less than 15 years. And even reprocessing spent fuel would only extend the nuclear fuel supplies to no more than 20 years.

However, there are alternatives to terrestrial uranium.

The world's oceans contain more than 4 billion tonnes of uranium in seawater. That's enough to power our entire planet for more than 3600 years or over 5000 years if spent fuel is also utilized. Japanese uranium from seawater demonstration projects estimate that marine uranium could be extracted at a cost of $135 to $250 per kilogram. Current world uranium prices are less than $35 per kilogram but expected to rise as uranium demand rises as new power plants are built around the world. But since uranium fuel only represents about 5% of the total cost of the energy produce by a fission power plant, that would only increase the total cost of energy via nuclear power by 14 to 31 percent which would still make the cost of nuclear electricity significantly lower than coal and natural gas. New laser uranium enrichment techniques, however, could dramatically lower total fuel cost which could, in theory, wipe out the increase in cost of using seawater uranium since enrichment represents 30% of the cost of nuclear fuel.

So even if our future global society used three times as much energy as we use today, marine uranium and spent fuel could provide more than 1600 years of energy. Of course the contribution of renewable energy systems (hydroelectric, wind, solar, and biomass) could stretch uranium supplies even longer.

But even without marine uranium, breeder technologies could power our global society at three times the current level for 700 years using terrestrial uranium. Nuclear breeding technologies such as fast neutron reactors or ADS accelerator reactors could increase fuel supplies by a factor of 140 since fissile uranium 235 only represents about 0.7% of natural uranium. In light water reactors (LWR), approximately 70% of the uranium 235 is converted into energy while another third comes from the conversion of plutonium into energy which is created as a by product of the neutron irradiation of uranium 238. Breeder technologies could give the world a 500,000 year supply of nuclear power or a 166,000 year supply at three times current energy use levels. However, the oceans are constantly being replenished with uranium from the worlds rivers, depositing over 32,000 tonnes of uranium annually. Since breeder technologies would only require less than 24,000 tonnes of uranium annually, marine uranium could power our entire society at three times the current level essentially-- forever!

A CANDU heavy water reactor could have an 80% conversion rate if it utilized fissile uranium or plutonium inside of a thorium blanket. A modified CANDU heavy water reactor that uses thorium fuel enriched with fissile uranium 235, plutonium 239, or uranium 233 can produce as much fissile fuel as it utilizes. An ADS accelerator reactor could also breed uranium 233 from thorium. For every kilogram of plutonium burned in a thorium breeder, approximately 2.73 kilograms of uranium 233 could be produced, more than 8o% of a reactors total fissile fuel requirements. Combined with the 30% of reprocessed uranium 235 from spent fuel, an ADS could supply all of a reactors fuel needs through uranium 238 and thorium 232. However, it might by easier and cheaper just to gradually replace third generation reactors with thorium and uranium burning ADS reactors.

Japanese companies currently lead the world in uranium extraction from sea water technology. But, in my opinion, the next US administration should set the goal for the commercial extraction of uranium from sea water within 10 years time. The US should also set the goal of having a functioning full scale ADS accelerator thorium breeder online within a decade with the goal of having commercial ADS reactors online within 20 years time. The same goal should be set by the Canadian government for the CANDU thorium breeder reactor.

Such policies should insure a smooth transition from our current terrestrial uranium, third generation, nuclear economy to a more diverse nuclear economy that includes current reactor technology, fast neutron reactors and ADS breeder reactors along with a more diverse fuel supply that includes terrestrial uranium, uranium from seawater, and thorium.

5. How long will nuclear energy last?

7. Burn Up the Nuclear Waste

9. Costs of Reprocessing Versus Directly Disposing of Spent Nuclear Fuel

11. The Cost of Recovering Uranium from Seawater

16. THE EVOLUTION OF CANDU FUEL CYCLES AND THEIR POTENTIAL CONTRIBUTIONTO WORLD PEACE

17. Is thorium the nuclear alternative?

This is an excellent article. In addition to the various methods you described to harness the power of uranium and thorium, newer pebble bed reactor designs are shown to be around 50% efficient. Smaller and safer designs have the potential to do more work with less fuel of course, thereby stretching the supply. You also point out how important it is to develop the thorium aspect of a nuclear infrastructure as soon as possible.

I'd only add the point that the ~4.5 billion tonnes of U in the oceans is not a fixed amount. It is the chemical solubility of U in seawater that maintains a concentration of ~ 3.3 ppb.

If we removed, say, 2 billion tonnes over thousands of years the leaching of U from ocean bottoms, hydrothermal vents, rivers discharges, etc., would maintain the ocean concentration at/near 4.5 billion tonnes U. :-)

Jason, I probably should have mentioned the pebble bed reactor since the recycling of the pebbles enables these reactors to utilize their fuel much more efficiently than other reactors.

It should be interesting to see how well these reactors are accepted once they are finally commercially available. I'm just glad the South Africans have finally decided to house them in containment structures to mitigate the possibility of any terrorist attacks.

I like to think of the containment structures as extra insurance policies for the PBMR's. While they should be safe enough, those containment structures bring greater piece of mind to the public. Anything the nuclear industry can do within reason and with extraordinary caution ought to be seriously considered. It's not just for the safety factor, it's also about keeping the public faith and trust.

I agree with you Jim. Marine uranium is a renewable source of energy.