If NASA is provided with $3 billion in annual additional funding from the DOD, as proposed in Part I of this article, then full funding for NASA's cis-lunar  architecture can begin in 2019.  About $1.5 billion annually could be used for the development of unmanned and crewed single staged extraterrestrial landing vehicles derived from Boeing's 2.4 meter in diameter super light weight cryotank technology. Most of the remaining $1.5 billion in annual additional funding could be used for the conversion of the SLS EUS into a solar powered  propellant producing water depots and into spacious deep space habitats and into regolith shielded lunar habitats.

Additional human spaceflight related funding for NASA will come from charging guest astronauts from foreign space agencies $150 million for every foreign astronauts participating in a beyond LEO mission for NASA. Since NASA's MPCV can carry up to six astronauts and private commercial companies will be capable of transporting up to seven individuals into orbit, NASA could easily accommodate up to three foreign astronauts per beyond LEO mission, saving NASA up to $450 million per flight.

Substantially  more funding for NASA will be available once funds currently dedicated for Commercial Crew-- development-- are ended in the early 2020s and the ISS program is, finally, ended in the late 2020s.

The following notional  SLS and private commercial launch sequences present a scenario for establishing a permanent American presence within cis-lunar space and  on the surface of the Moon  by the mid 2020s while also establishing water mining and propellant producing architecture on the lunar surface and a propellant producing water storage systems at LEO and EML1. During the 2020s, under this scenario, SLS flights will be limited to two launches per year once new RS-25 engines are in production. 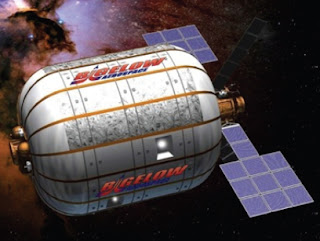 CLV-7B: Notional cargo landing vehicle that uses seven Boeing 2.4 meter super light weight cryotanks.  With a water bag attached to the top of the vehicle, at least 35 tonnes of water can be delivered to EML1 from the lunar surface. CLV-7B should be capable of being reused at least ten times. 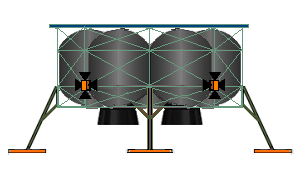 CST-100 (Starliner): Boeing Aerospace commercial crew capsule. Combined with an ACES-68 and a Cygnus module, the Starliner could  be utilized as a reusable orbital transfer vehicle within cis-lunar space. 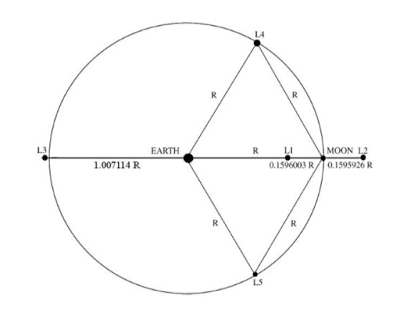 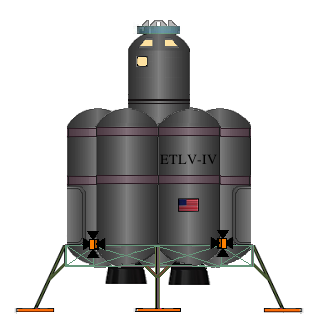 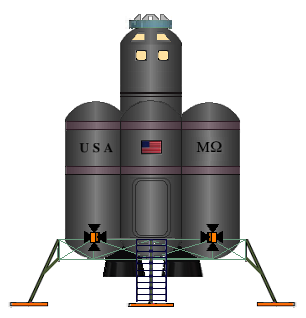 LRH: Notional CLV-7B deployed Lunar Regolith Habitat derived from SLS hydrogen tank technology that automatically deploys a surrounding regolith wall (eight aluminum panels hinged to the side of the pressurized habitat and joined together by an enveloping kevlar sheet ) filled with lunar regolith  2 meters thick, reducing radiation exposure withing the pressurized habitat to less than 5 Rem per year even during solar minimum conditions 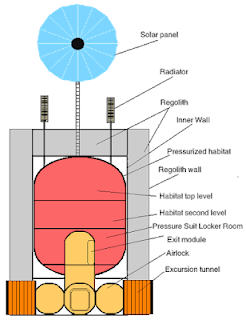 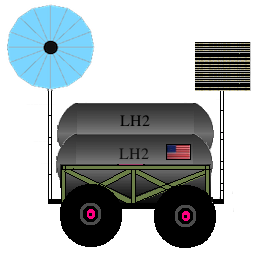 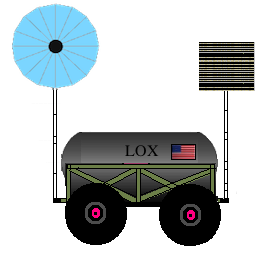 MPCV (Orion Multipurpose Crew Vehicle): Would enable the SLS to be used to deploy astronauts practically anywhere within cis-lunar space and return them safely to the Earth's surface. A radiation shielded Cygnus habitat module would be required to adequately shield astronauts from the deleterious effects of heavy ion radiation. 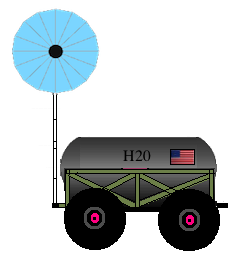 OTV-125: Notional reusable EUS derived orbital transfer vehicle utilizing ULA  IVF (Integrated Vehicle Fluids) technology  would be capable of transferring spacecraft and other payloads up to 90 tonnes in mass from LEO to other regions of cis-lunar space

SLS: Space Launch System would be capable of deploying 70 to 105 tonnes to LEO or more than 30 tonnes of payload to the Earth-Moon Lagrange points

Water Bug: Notional mobile robotic vehicle that utilizes microwaves to extract water from the lunar regolith at the lunar poles. 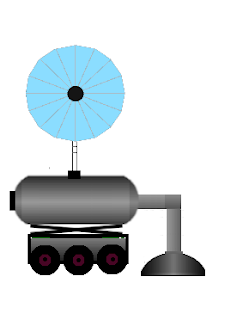 WPD-LV-7A: Notional  propellant producing water depot derived from seven 2.4 meter cryotanks capable of self deploying itself to the lunar surface after SLS launch into orbit. The WPD-LV-7A would be capable of storing up to 70 tonnes of LOX/LH2 propellant and up to 150 tonnes of water. 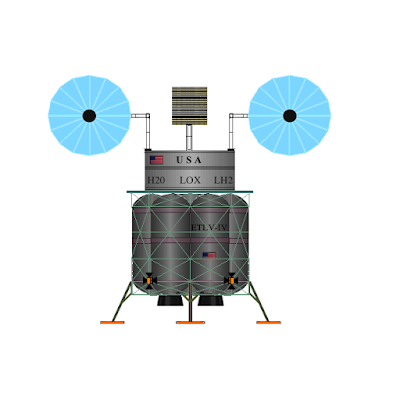 WPD-OTV-125: Notional reusable propellant (LOX/LH2) producing water depot derived from the EUS and utilizing IVF technology capable of storing up to 125 tonnes of LOX/LH2 propellant and up to 200 tonnes of water.


Notional  launch sequences utilized to progressively establish a permanent American presence on the surface of the  Moon:

1. This will be  the beginning of private commercial crew launches to LEO and  the return of crew launches into space  from American soil and

1. This will be the beginning of NASA's heavy lift program

SLS Launch 3: First  SLS/EUS  launch of a crew aboard the Cygnus/Orion MPCV to EML1


1. The beginning of two NASA SLS launches per year.

3. The first test launch of the EUS for an unmanned mission should enhance the safety of the first crew launch later in the year

4. Since the BA-330 will have more than 40 cm of shielding, that should be more than enough to effectively protect astronauts beyond the magnetosphere from the deleterious effects of heavy ions and radiation from major solar events.

5. Lunar navigation satellites will enable NASA and the DOD to deploy payloads to the lunar poles and to communicate with astronauts on the lunar surface at the lunar poles.

2. After producing its own propellant at LEO,  the WPD-OTV-125 depots will transport itself and its detachable solar array to EML1

3. An  ETLV-4 vehicles will be tested unmanned, traveling from  LEO and EML1 where it will refuel to return to LEO

4. A second unmanned  ETLV-4 will also travel from LEO to EML1 but will return with astronauts aboard who initially traveled to EML1 aboard the MPCV .

5. MPCV will remain docked at the BA-330 @ EML1 as an emergency escape vessel

6. DOD astronauts will be launched to their LEO BA-330 LEO habitat by commercial crew launch vehicles

SLS Launch 6:  Deployment of OTV-125 plus  two tele-operated R-ETLV-4 to LEO (destined for the lunar poles).


1. The MPCV will no longer be used to transport astronauts to EML1.

3. OTV-125 will be used to transport heavy SLS payloads (up to 90 tonnes) from LEO to other regions of cis-lunar space.

SLS Launch 8: Deployment of two CLV-7B to LEO and then transported to EML1 by reusable OTV-125: Fueled at the EML1 depot, the first CLV-7B will have an  ATHLETE robot that will deploy electric powered excavation vehicles, sintering vehicles, , backhoe, lifting crane,  to the south lunar pole. The second EML1 refueled  CLV-7B will be used to deploy  four mobile solar arrays with more than one MWe of  total electric power capacity to the South lunar pole.

SLS Launch 9: A  single  CLV-7B to orbit plus a second  OTV-125 orbital transfer vehicle plus a single CLV-7B carrying a Lunar Regolith Habitat (LRH) will be deployed to LEO. The OTV-125 will transport the CLV-7B and the LRH to EML1. Fueled at EML1, the  CLV-7B to deploy a LRH to the already sintered landing area at the lunar outpost at the South lunar pole.


Commercial Launch 1:  BA-330 launched to LEO for DOD by commercial launch vehicle and then transferred to EML1 by OTV-125

1. Teleoperated mobile microwave robots will sinter areas for landing spacecraft, deploying solar arrays, and for habitat modules, and for propellant depots will be created

4. First NASA and DOD astronauts transferred between LEO and EML1 by private commercial  ACES-68/CST-100/Cygnus.  The use of reusable private commercial orbital transfer vehiclees will allow NASA  to use its reusable ETLV-4 vehicles exclusively for crew missions to the lunar surface from EML1.

5. Reusable teleoperated ACES-68 space vehicles could also refuel at NASA LEO depots in order to deploy satellites to GPS, geosynchronous, and polar orbits. An Delta IV heavy, for instance can only deploy a satellite weighing up 6.7 tonnes into geosynchronous orbit; but it could place four such satellites into low Earth orbit which could later be transferred to GEO by the ACES-68.

5. Reusable teleoperated ACES-68 vehicles could also be used to transfer duplicated military satellites to EML4 where the could be safely stored away and monitored and redeployed if a similar satellite is damaged.

SLS Launch 11: A second SLS launch will deploy a single  CLV-7B to orbit plus a second  OTV-125 orbital transfer vehicle. Transported by the OTV-125 to EML1, the fueled CLV-7B to deploy a LRH (Lunar Regolith Hab to the lunar surface.

Commercial Launch: BA-330 launched to LEO for DOD by commercial launch vehicle and then transferred to EML4 by OTV-125


1. The DSH will allow NASA to test the integrity of SLS EUS derived pressurized habitats

2. Teleoperated MHT and MLT units will extract the liquid hydrogen and oxygen from the WPD-LA-7A depots in order to refuel the reusable ETLV-4, R-ETLV-4, and CLV-7B vehicles.

3. Teleoperated MWT will be used to extract the water stored at  the WPD-LV-7A in order to fill up water bags tied securely on top of the reusable CLV-7B vehicles in order to transport lunar water to the propellant producing water depots located at EML1.

The conclusion of this article (Part III: Artificial Gravity and Mars)  will be posted next week.