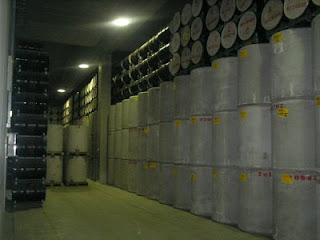 In fact, all of the spent fuel so far produced in the US could fit into a football field just 10 meters high. And if this fuel was reprocessed, then the volume could be reduced by at least a factor of ten. So you could easily store all nuclear waste material in fortified cask at just one nuclear facility. 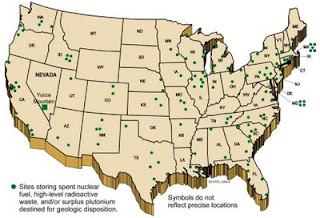 Nuclear waste locations within the continental US
But Yucca Mountain is clearly not the long term solution for radioactive waste within the US.

My solution to this problem would be to:

1. To mandate that all radioactive waste material that exist within the geographic territory of a state be kept within that state at environmentally secured federal, state, or private facilities for up to 200 years.

3. Alternatively, states could petition the federal government to build a-- nuclear energy park-- within their state to house and reprocess all of their nuclear waste for fuel which could then be utilized on site. A nuclear energy park would consist of 10 to 40 reactors and would be utilized to produce regional electric power, ammonia for agricultural fertilizer and hydrogen for the production of synthetic hydrocarbon fuels such as gasoline, diesel fuel, and aviation fuel through biomass or through the extraction of carbon dioxide from the atmosphere. Adding hydrogen to biomass increases the efficiency of synthetic fuel production by 3 to 5 times.

4. After 200 years, the waste would be removed from the state repositories or nuclear parks for final deposition. Final deposition could be extraterrestrial disposal using 23rd century space technology, or deep sea disposal, or disposal on a tiny island.

Of course, much of this radioactive material may be deemed too valuable to throw away a few centuries from now. Who knows, the humans and industries of the 23rd century might even pay big bucks for what 21st century humans use to call nuclear waste:-)

Yucca Mt. came about from the Nuclear Waste Policy Act. To change the plan for Yucca Mountain would mean to change the law that it is already overdue in fulfilling its obligation. The real tragedy with Yucca Mt. is how it has become a tactical obstacle to block the progress of nuclear energy. Otherwise the engineering and transport systems for Yucca are very good and Nevada need not worry. However, I can understand their sentiments after being a testing ground for nuclear bombs for so many years. I might be a little touchy about anything nuclear after all that.

The law needs to be changed, IMO, for the simple reason that Yucca Mountain wouldn't be able to accommodate any substantial increase in nuclear power in this country. This nation needs several hundred more reactors if we're going to seriously deal with global warming and substantially reduce the import of foreign oil (if we all drove plug-in hybrids 20 years from now then it is estimated that foreign oil imports would be cut in half).

Rushing to permanently dispose of spent fuel is a mistake, IMO. We might want to reprocess that fuel in the near future. This is not some urgent ecological crisis. Its simply a matter of public relations.

Temporary (200 to 300 year) above ground state repositories would be the simplest and the fairest way to accommodated this relatively small amount of material until reprocessing and final deposition or transmutation is required.

We don't need 23rd century mankind to consider that nuclear waste is valuable.

We 21st century mankind already know that there is enormous amount of energy that can be tapped out of the U-238.

Reprocessing technology from the 1970s reduces the volume of the waste by 10% ?

New generations of breeder reactors reduce this volume to 1/40th the size. And they produce 60 to 100 times more power than a LWR, out of the same amount of fuel. We would be stupid to not use them.

The figures : 1GW-Yr of electricity produced in a LWR produces 38 Megatons of waste products.

And the longevity of waste from an LFTR is just 300 years, after which their radiation falls to natural levels. We don't need no longterm repository (neither in outer space, nor in deep ocean seabed). And this is not 23rd century technology. It is right here, right now !

Of course, we currently don't have any fast breeder reactors. And such devices probably won't be commercially online until the 2030's.

That's why we need an alternative solution to the Yucca Mountain repository that is scientifically reasonable and politically acceptable to the public until the age of breeders arrives.

You're kidding right? You actually think it's okay to sanction the storage of nuclear waste for 200 or so years? Okay Scarlett, you need to understand that Rhett has left the building and he is not coming back. The solution is not to pass it off on to a generation that has had no say in what it's being given. That is just short of being a crime.

And who will live amongst these storage facilities? Because if we judge by the measure of urban sprawl that has been progressing at a rapid rate, it won't take long before we will all be living right up against this nuclear waste.

Maybe you should check out my post again - http://www.thenilonreport.com/2009/02/teach-me-something-i-dont-know-about.html - where I site that even the containers have a life span of 20 years (which we are still using)and they are leaking. Try convincing the public to support these facilities to be placed in their back yard.

First of all, radioactive waste material from hospitals, the military, and commercial reactors has to be stored some place.

Secondly, the amount of radioactive waste from nuclear power plants is extremely small. You could place all of the nuclear waste ever produced by the commercial nuclear industry into an area the size of a football field only a few meters high. However, if that material was reprocessed then the volume would be even smaller.

Third, all nuclear waste material can be processed into solid materials. So leakage wouldn't be a problem.

Fourth, I prefer storing residual radioactive waste material at large centralized nuplexes (nuclear complexes). If you assume that a nuplex grows from 2 reactors to 40 reactors over the course of 20 or 30 years and that each reactor has an 80 year lifetime then the last reactor wouldn't go off-line until at least 100 years after the first reactor went on line.

Then you've got to decommission the reactors. The cheapest and safest way to do this is to allow the reactors to decay on site for up to 130 years. So since you're allowing the reactors to decay for more than a century, you might as well do the same for the residual nuclear waste material already stored there. You kill two birds with one stone.