The NASA Authorization Act of 2010, requires that NASA build a Space Launch System (SLS) whose core elements, without an upper stage, are initially capable of lifting 70 to 100 tons (63 to 90 metric tons) to low-Earth orbit no later than December 31, 2016.

"The NASA Authorization Act of 2010 directs NASA to begin development of the SLS achieving operational capability for the core elements not later than December 31, 2016. While NASA will work as expeditiously as possible to meet the 2016 goal, NASA does not believe this goal is achievable based on a combination of the current funding profile estimate, traditional approaches to acquisition, and currently considered vehicle architectures. However, we are exploring more innovative procurement and development strategies to determine whether we can come closer to the December 31, 2016 goal." 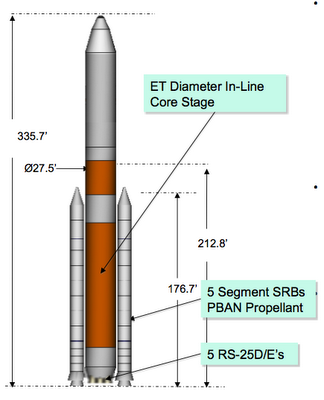 NASA presented a reference heavy lift vehicle that consisted of a LOX/LH2 core stage with 5 RS-25 engines plus two 5-segment SRBs and a J-2X upper stage which they believe comes closest to complying with the Congressional mandates. While the 5-segment SRB and the J-2X upper stage is currently under development by NASA and its vendors, this reference vehicle actually greatly exceeds the minimum requirements mandated by Congress.

Secondly, a LOX/LH2 upper stage is also not necessary in order to reach the minimum lifting capability of 63 metric tons required by Congress. A stretched core LOX/LH2 vehicle with 5 RS-25E rocket engines and two 4-segment solid rocket engines should be able to lift more than 70 metric tons into low-Earth orbit.

So several billion dollars in SLS development cost could be saved by deferring funding for the upper stage and the 5-segment SRBs until the basic core vehicle mandated by Congress is operational.

Additionally, with 5 shuttle derived RS-25E engines, the core vehicle could also be utilized as a crew launch vehicle potentially capable of launching 20 to 35 tonnes into low-Earth orbit without in SRBs. Statistically, this should be a substantially safer vehicle than utilizing an HLV with SRBs for crew launches.

"As noted earlier, the NASA Authorization Act of 2010 directs NASA to begin development of the MPCV (Multi-purpose Crew Vehicle) with the goal of achieving full operational capability not later than December 31, 2016. While NASA will work expeditiously to meet the 2016 goal, NASA notes that, as with the SLS, a 2016 crewed first flight does not appear to be possible within projected FY 2011 and out year funding levels."

This time Lockheed Martin's Orion concept from the now defunct Constellation program was used as the reference vehicle: LAS (Launch Abort System), CM (Command Module) that can carry 2 to 4 passengers and land in the ocean, and a hypergolic fueled SM (Service Module).


However, Boeing is also privately developing a CM that they believe can be ready to take passengers into orbit by 2015. Boeing's CST-100 is being designed to carry up to 7 individuals to orbit with a capability of landing of both water and land. The CST-100 is also being designed to fly on top of a variety of launch vehicles: Atlas, Delta, and Falcon 9. Like the Orion, the CST-100 could also be reused up to 10 times. So the CST-100 could be a faster and cheaper option for NASA to help fund and develop since Boeing is already committing its own finances to the venture. And since the CST-100 could be used by a variety of private companies, manufacturing cost for the CST-100 might fall significantly. 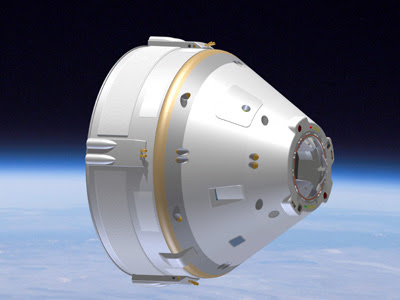 The ULA (the United Launch Alliance) is currently contemplating developing a new upper stage for its Atlas and Delta vehicles that could serve as a SM (Service Module) for NASA's Multipurpose Crew Vehicle. The ULA's ACES 41 LOX/LH2 concept could be an alternative to hypergolic fueled SM with substantial advantages for LEO and beyond LEO missions.

Secondly, the ULA intends to design the ACES 41 to be compatible with space depots. Since a fully fueled ACES 41 would have a delta V capability of at least 5600 meters per sec, it would be capable of traveling from LEO to lunar orbit and the Earth-Moon and Earth-Sun Lagrange points and return to Earth through aerobraking.

Beyond LEO missions for the MPCV can be conducted without an EDS (Earth Departure Stage) by utilizing the heavy lift vehicle to place an ACES derived fuel depot. A crew launcher could then place the MPCV with its ACES-41 SM into orbit where it would dock with the fuel depot to add additional LOX and LH2. And then it could proceed with its mission to the Lagrange points or to lunar orbit and back to Earth. A single HLV launch of a 70 tonne fuel depot several MPCV voyages within cis-lunar space since the SM is likely to carry at least 10 to 20 tonnes of residual LOX and LH2 fuel. 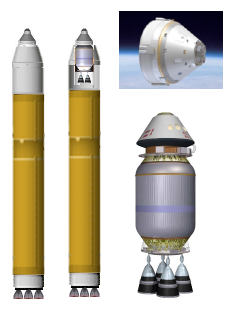 Boeing's CST-100 Command Module combined with the ULA's ACES-41 Service Module. Replacing the hypergolic fueled SM with an ACES-41 SM could allow the age of space depots to begin this decade. The CST-100 uses a hypergolic pusher abort system, no tractor LAS is required. (Credit Boeing and ULA)

Again, since the ULA intends to fund the ACES 41 for its own use, NASA could help to fund its development for the MPCV which would be mutually beneficial for NASA and the ULA and the US military which uses the ULA to deploy satellites for the US military.

So in order for NASA to expedite the development of its SLS and MPCV in order to have in fully operational before the end of 2016 it needs to:

1. Stop funding the immediate development of the 5-segment SRBs for the SLS and instead use existing 4-segment booster technology

2. Stop funding the development of a LOX/LH2 upper stage

Once the core SLS vehicle or vehicles are fully operational, then NASA can start fully funding the EDS upper stage, the 5-segment SRBs, and maybe even a reusable single stage lunar lander. This will allow us to conquer cis-lunar space for both public and commercial benefit while also greatly enhancing our ability to go on to Mars. 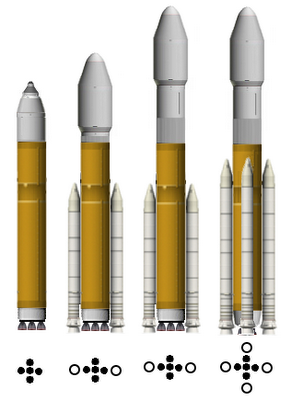 3. How Apollo Was Saved & Lessons For Today's NASA

4. A Response to NASA from Senator Nelson and Hutchison

8. Boeing's New HLV Concept could be the DC-3 of Manned Rocket Boosters
Posted by Marcel F. Williams at 7:42 AM 5 comments:

The Dirty Business of Clean Coal 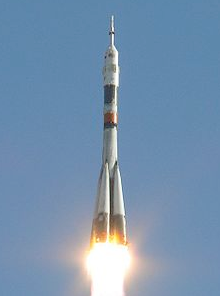